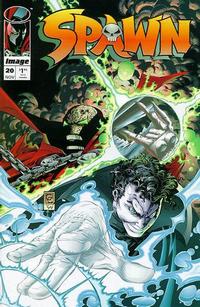 Houdini and Spawn attend a conference that has been taken hostage by a madman with an atomic bomb. As Houdini watches the bomb's countdown, he realizes that he's been double-crossed -- the original plan was to destroy Spawn in the blast, but Houdini is being sacrificed as well. At the last minute Houdini channels the explosion into another reality.

Retrieved from "https://heykidscomics.fandom.com/wiki/Spawn_Vol_1_20?oldid=1405174"
Community content is available under CC-BY-SA unless otherwise noted.