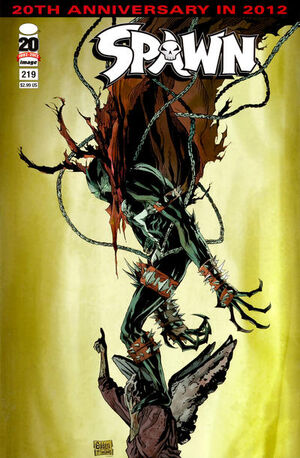 Appearing in "Eye of the Storm"Edit

The epic battle between the one-time ruler of Hell's Eighth Circle and the world's newest Hellspawn is HERE. But the showdown may be more one-sided than anyone expected. Witness a NEW EVOLUTION as SPAWN heads into its next unpredictable and thrilling chapter.

Retrieved from "https://heykidscomics.fandom.com/wiki/Spawn_Vol_1_219?oldid=1405314"
Community content is available under CC-BY-SA unless otherwise noted.