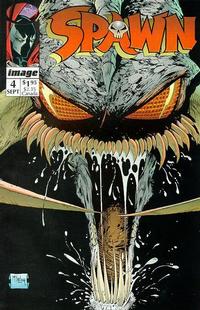 Violator and Spawn fight brutally until Malebolgia intervenes, explaining to them that they are both his minions in his battle against Heaven. Malebolgia also punishes Violator for his unscheduled killing spree, locking him in his clown form.

Retrieved from "https://heykidscomics.fandom.com/wiki/Spawn_Vol_1_4?oldid=1405092"
Community content is available under CC-BY-SA unless otherwise noted.