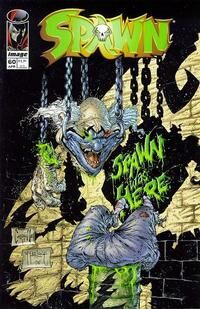 Terry Fitzgerald holds Wanda Blake into the night and curses at Al under his breath.

Meanwhile in Rat City, Cogliostro pleads for Spawn not to kill the police searching the alley. He tells Spawn to understand why he's back on earth before killing more. Spawn is suddenly caught off guard by a high-tech soldier and unleashes his anger on him. The police squad call in about finding Cy-Gor and call for Cyan Fitzgerald's picture to be spread all across the city.

Violator thinks about all the trouble he's causing between all parties of Jason Wynn, Fitzgerald, and Spawn with his move of kidnapping Cyan. He prepares a poisoned drink for her while she sleeps.

At CIA HQ, Jason Wynn is told by his men they can't get near Fitzgerald with all the police monitoring. He is then told the police are investigating Spawn for kidnapping Cyan. He tells them the priority isn't the girl. It's finding out who Terry had shared his information with.

In Queens, New York, Spawn surprises Terry in his bathroom. He tells him he didn't take Cyan and he needs help to get her back. He grabs something one of Cyan's toys from her room while Terry distracts Wanda Blake.

Spawn attempts to use one of her stuffed animals to connect his aura with hers since she has his shoelace.[1]

Spawn finds Cyan and attacks Violator rather than bring her to safety. Spawn strangles the Clown until Psychoplasm oozes out from him. Spawn tells him Wynn and Chapel are next after he kills him. The Clown laughs hysterically and asks if he still believes it was Chapel that killed him. Spawn uses his Necroplasm to bath him in an acid bath, killing him.

Spawn returns Cyan to her family and Wanda thanks God for her return.

Retrieved from "https://heykidscomics.fandom.com/wiki/Spawn_Vol_1_60?oldid=1405194"
Community content is available under CC-BY-SA unless otherwise noted.