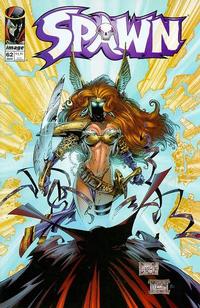 Spawn confronts Jason Wynn, only to have his revengeful anger stymied once again. Wynn informs him that if he dies Terry, Wanda, and Cyan will be eliminated. Knowing that he doesn’t bluff, Spawn turns it into a Catch-22 situation. Later, in the alley chaos erupts when Angela and Spawn are thrown together to discuss the unraveling of the Universe. As Spawn rests from the ordeal, an unknown force heals his face to the one Wanda fell in love with. Meanwhile, a friend informs Terry of a neighborhood petition to force them out of the area.

Retrieved from "https://heykidscomics.fandom.com/wiki/Spawn_Vol_1_62?oldid=1405251"
Community content is available under CC-BY-SA unless otherwise noted.