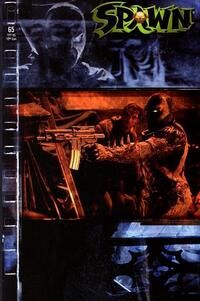 When Cog promises to answer Sam and Twitches questions, they follow him into the deepest parts of Rat City. Twitch takes notes as Cog tells the tale of Spawn’s confused existence as it relates to them. They view Spawn’s throne and hear of his life as it was on Earth before he returned as a warrior from the dark side. As the tour ends Cog reveals that Sam and Twitch have been chosen by Spawn to help him on his quest to regain his lost humanity.

Retrieved from "https://heykidscomics.fandom.com/wiki/Spawn_Vol_1_65?oldid=1405260"
Community content is available under CC-BY-SA unless otherwise noted.