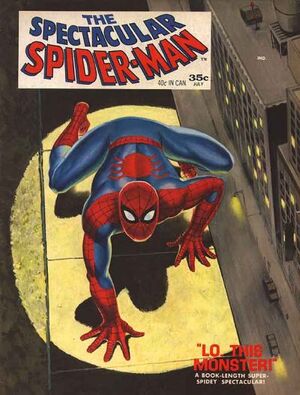 Appearing in "Lo, this Monster!"Edit

Synopsis for "Lo, this Monster!"Edit

Spider-Man is in the neighborhood as a Man Monster destroys a political billboard for the Mayoral candidate, Richard Raleigh. Two workers, installing the billboard, are almost killed by the rampage, but Spidey is able to rescue them and then battle the terrorizing titan until he is defeated and left, in order to rescue the workers again from falling from a ledge of a building, where Spider-Man had placed them out of the monster's path of destruction. When the Web-Crawler returns to mop up his opponent, he discovers he is now gone. Spider-Man reverts back to his civilian identity of Peter Parker and discovers the whole city has become "Raleigh Rooters" and that the candidate seems to have some unbelievable hold on the masses. His pals, Harry and Mary Jane, are among his most boisterous followers only outdone by his boss, J. Jonah Jameson, who has put his newspaper, The Daily Bugle, fully behind Raleigh's candidacy.

As New York watches Raleigh on television cry for union against the city's underworld who are obviously trying to intimidate him from running for mayor, he puts on a show that makes him seem like a common man who has the city's interest at heart. However, after the cameras stop rolling, he shows his true colors as a power-hungry ego-maniac who has his own interests at heart. Atop of his interest is to destroy Spider-Man and former Police Captain, George Stacy, who, he has learned, is looking into his background. It is revealed that Raleigh is behind the cyborg Man Monster and his creator, Dr. Thraxton. As Peter picks up Gwen for a date and drives away they witness the Man Monster attack the home of Capt. Stacy. Peter sends Gwen for help and then changes into Spider-Man in an attempt to save Mr. Stacy. The fight is carried on to Raleigh's house, which Spidey figures out must be behind the creature. He brings the fight into the Raleigh house where Raleigh uses the pain control apparatus he uses, to keep the Man Monster compliant to his will, a little too much and damages it beyond repair. The creature then turns on Raleigh and Dr. Thraxton, killing them both. Spidey finishes the fight with a vicious side-hand smash to the creatures neck, apparently killing the creature. Spidey leaves as he hears approaching sirens and is seen by Jameson, which he predicts correctly, will use his paper to call him the killer of Raleigh. Jameson states that he will make the public hate the fact that a man as great as Raleigh is dead, while the menace of Spider-Man is still alive and free.

Appearing in "In The Beginning--"Edit

Synopsis for "In The Beginning--"Edit

Retrieved from "https://heykidscomics.fandom.com/wiki/Spectacular_Spider-Man_Magazine_Vol_1_1?oldid=1453258"
Community content is available under CC-BY-SA unless otherwise noted.