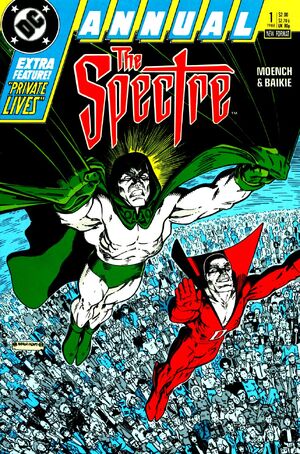 Kim Liang is a whimsical and oblivious woman who tries to make the best as Jim Corrigan's assistant. While cleaning Jim's office, she finds a bubblegum ball on the floor and takes it to her mouth, but she doesn't chew it and takes it out a few minutes later as she keeps cleaning the place. However, the bubblegum ball was actually the egg of a small demon who is born thanks to the warm touch of Kim's mouth and it jumps into Kim's purse as she is leaving the place.

On her way home, the demon creates all sorts of troubles, but Kim assumes it's all part of a normal day in New York. When she arrives home, Kim has to deal with her strange roomate called Cynthia, who acts and behaves in very strange ways. When Kim grabs an apple from her purse, she realizes it's rotten and several demons come out of it after feasting on the fruit. Kim and Cynthia try to defend themselves from the countless little demons, but their efforts are futile and it is Spectre who arrives and takes the demons away. Frustrated, Kim berates at Spectre for leaving his human host and Cynthia is impressed by Kim's strange friend.