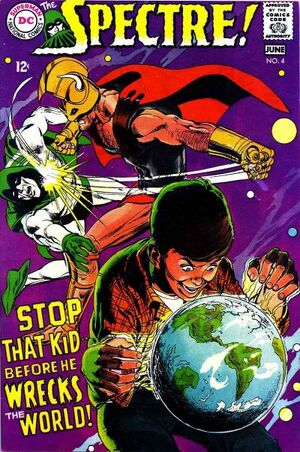 Appearing in "Stop That Kid.. Before He Wrecks the World!"Edit

Synopsis for "Stop That Kid.. Before He Wrecks the World!"Edit

Jim Corrigan investigates a case involving a missing boy, Hamilton Benedict. The Spectre locates the boy who has been possessed by an evil spirit. The Spectre tries to draw the evil out of the boy, but he is unable to do so without causing harm. The evil spirit then begins causing destruction on Earth. Spectre tracks the source of the evil through space. He finds several worlds that the spirit visited which are now completely evil. The Spectre returns to Earth without a solution on how to stop the evil without killing Hamilton. Jim Corrigan urges him to make a decision to save the world or save the boy.

The Spectre then begins his attack. Though he initially decides to sacrifice the boy, he cannot go through with it. By demonstrating compassion for the child, the Spectre is able to drive out the evil spirit. The spirit then leaves the Earth having been defeated by the power of goodness.

Retrieved from "https://heykidscomics.fandom.com/wiki/Spectre_Vol_1_4?oldid=1457951"
Community content is available under CC-BY-SA unless otherwise noted.