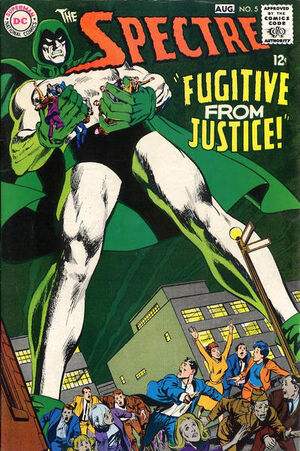 Appearing in Chapter I "The Spectre Means Death?" / Chapter II "Fugitive from Justice!"Edit

Synopsis for Chapter I "The Spectre Means Death?" / Chapter II "Fugitive from Justice!"Edit

The Psycho-Pirate steals a magic globe to locate a source of mystic energy that will enable him to remove the magic mask that Doctor Fate used to deny him the use of his powers. The globe gives the Pirate control over a drifter who becomes a giant and can focus the emotion manipulation powers of his master. When the Spectre tries to stop the giant drifter, Psycho-Pirate causes bystanders to fear him. He also siphons off the Spectre's powers. The Spectre seeks to renew his energy by entering the body of Jim Corrigan, but Corrigan wants to arrest him. Instead the Spectre uses his remaining power in a final confrontation with the drifter. He manages to neutralize the giant, but in doing so he allows the Psycho-Pirate to overcome him.

The drifter is then revealed to be Gat Benson, the man who killed Jim Corrigan. When he sees Corrigan alive, Benson panics and accidentally smashes Psycho-Pirate's magic globe. Corrigan is then able to knock out both crooks and reverse the effects of the Pirate's emotional control on the Spectre.

Retrieved from "https://heykidscomics.fandom.com/wiki/Spectre_Vol_1_5?oldid=1457952"
Community content is available under CC-BY-SA unless otherwise noted.