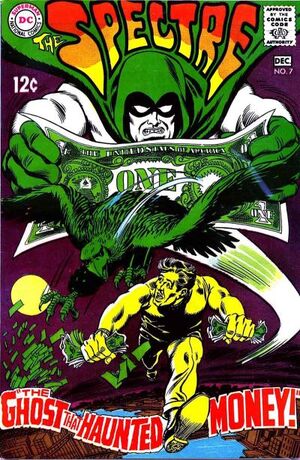 You will leave only when the money is in the bank's custody... and you are in mine!

Appearing in "The Ghost That Haunted Money!"Edit

Synopsis for "The Ghost That Haunted Money!"Edit

A gunman, Frankie Barron, robs Gateway City Bank, but is shot by the security guard. In his dying breath, he says that he'll never let go of the money. Detective Corrigan investigates the scene, but doesn't see Frankie's ghost rise. Unable to physically hold the money, but still wanting it all, he causes any money withdrawn to fly back into the bank. At this point, Detective Corrigan's "Spectre senses" kick in and he notices the ghost. The ghost speeds off and comes to the conclusion that his ghost is sticking around becuase of his desire to heist the dough. He manages to hire men to help him with a night-time bank heist. It's up to the Spectre and Detective Corrigan to stop the robbery, and put the ghost to rest, but in order to do that, the Spectre will need to make Frankie hate money!

Appearing in "The Hour Hourman Died!"Edit

Synopsis for "The Hour Hourman Died!"Edit

Hourman fights Tricky Dick Arnold to recover stolen Tyler Chemical Company blueprints. However, a shot from the Metalizer Gun that Tricky Dick used to get into Tyler's vault seems to have killed Hourman. Dick disposes of the Metalizer Gun, but Hourman isn't dead yet-- it would seem the radiation won't kill him until the Miraclo wears off! He pursues Arnold, captures him, and retrieves the gun, allowing him to find the antidote to reverse the effects of the Metalizer gun - just in time!

Retrieved from "https://heykidscomics.fandom.com/wiki/Spectre_Vol_1_7?oldid=1457954"
Community content is available under CC-BY-SA unless otherwise noted.