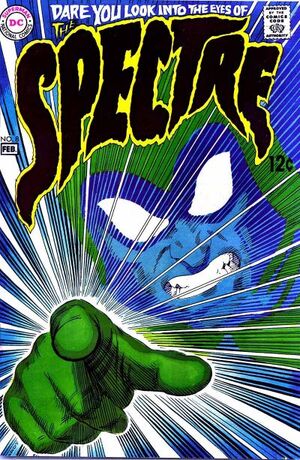 Appearing in "The Parchment of Power Perilous"Edit

Synopsis for "The Parchment of Power Perilous"Edit

An 18th century sorcerer attempts to open a doorway to unlimited power. He records the secret on parchment, then realizes that such power is evil. When he attempts to destroy the parchment, his apprentice Narkran kills him. Narkran then uses the parchment to gain limitless power and leaves the Earthly plane. Eventually he realizes that his body cannot contain such power. He must return to Earth and find the parchment which he believes contains additional secrets vital to his survival.

Meanwhile, the Spectre helps Jim Corrigan battle the Carstagg Mob. The Spectre acts recklessly and nearly kills an innocent bystander. The Spectre is punished for his actions and will be given a weakness when presented with stressful situations in the future.

Narkran returns to the Earthly plane after 200 years seeking the parchment. The Spectre goes to battle the supernatural foe. As the battle ensues, the Spectre's new weakness presents itself in the form of blindness. The Spectre then must overcome Narkran without his vision. He does so, then he also destroys the parchment. Narkran is destroyed, and the Spectre's eyesight returns.

Retrieved from "https://heykidscomics.fandom.com/wiki/Spectre_Vol_1_8?oldid=1457955"
Community content is available under CC-BY-SA unless otherwise noted.