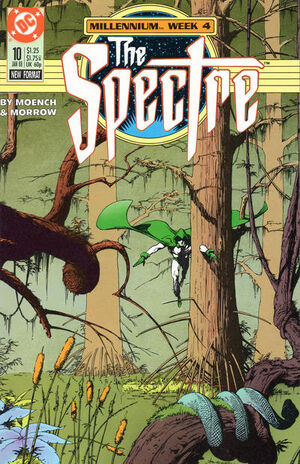 Having deduced the location of the Manhunters' temple after one of their number attacked Madame Xanadu in her parlor, the Spectre, Jim Corrigan, and Kim Liang travel to New Orleans. While the Spectre investigates, Jim and Kim are in a restaurant when a local man bursts in, claiming to have seen and been pursued by a strange being in the nearby swamp. Kim remains to hear the man's story, while Corrigan leaves to search the surrounding area. Meanwhile, the Spectre discovers the Manhunters "sonic temple", as well as a group of local people being held captive by a Manhunter in the bayou. Entering the Manhunter's body intending to possess him, the Spectre instead finds himself falling into a microcosmic world within the android's physical form. Here he battles strange beings guarding a key-like object. Once the Spectre grasps and turns the key, the Manhunter begins to malfunction and is ultimately deactivated, and his prisoners escape. The Spectre now finds himself faced with a second key and a second set of guardian-creatures. Unknown to him, he is now within a second Manhunter, in an alleyway in town. Repeating his actions, he causes this Manhunter to self-destruct, and its demise is witnessed by both Jim Corrigan and Batman. (Corrigan and Batman then join forces to enter the swamp and free more prisoners being held in the sonic temple, as seen in Detective Comics

Manhunter after another; again and again he defeats the creatures within, turns the key, and causes the android to collapse. Because he cannot escape back into the outside world, and has no way of knowing what effect, if any, his actions are having, he decides that his present course of action is futile. Thus, instead of turning the key inside the android he currently possesses, he enters the key itself and discovers an interdimensional nexus connecting the linked minds of the Manhunters with the source of the telepathic transmissions controlling them. This nexus also contains the portal which will allow the Spectre to return to Earth, but he is unable to breach it. Fortunately, the experimental bomb brought to the temple by the Suicide Squad then explodes (as seen in Suicide Squad #9), destroying the remaining Manhunters and unlocking the portal between dimensions, allowing the Spectre to break free. As he does, Batman and Corrigan escape the temple, and the only after-effect of the explo- sion is a light snowfall (due to the actions of Captain Atom and Firestorm, as seen in Captain Atom #11).

Retrieved from "https://heykidscomics.fandom.com/wiki/Spectre_Vol_2_10?oldid=1457967"
Community content is available under CC-BY-SA unless otherwise noted.