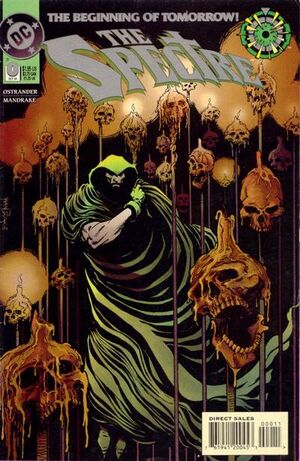 Appearing in "The Temptation of the Spectre"Edit

Synopsis for "The Temptation of the Spectre"Edit

The Spectre is drawn to a hospital's nursery. One of the newborns tells the Spectre to enter his soul, which the Spectre gladly does. Once inside, the Spectre learns that the baby is the latest incarnation of Lady Beltane, an enemy with whom the Spectre has clashed many times. The Spectre does not remember her. Beltane says that they both have the same mission: to cleanse the world of evil. She says that if they work together, the Spectre may finally be able to rest. At that, the Spectre agrees to listen.

It began with God, who created many different aspects of itself to perform different functions. The Wrath of God became known as the Spectre; this was the entity responsible for many biblical disasters. When Jesus was born, the Spectre Force was cast into Limbo, for vengeance and forgiveness could not walk the earth at the same time. But when Jesus died, the Spectre Force exploded out of limbo and swept over the earth in full fury. However, the archangel Michael stopped the Spectre Force from destroying humanity. Michael informed him that God had decided all beings such as the Spectre Force must be linked with human souls.

Michael brought the Spectre Force away from the Middle East, to a different belief system. Thus, in a Hindu society in southern Asia, the Spectre was linked to a man named Caraka. Caraka, along with his wife and child, had been slain by Lady Beltane. Lady Beltane told Caraka that she killed them because they were tainted with evil—simply because they were alive. Beltane captured the souls of Caraka's wife and child, but she was unable to capture Caraka's.

While in Limbo, the god Kali offered Caraka the opportunity to become an aspect of Shiva the Destroyer. In exchange, Caraka would risk losing a chance at Nirvana. Caraka gladly accepted the offer and became the Spectre's first human host. The first thing Caraka did as the Spectre was confront Lady Beltane. She managed to escape, but the Spectre freed the souls she had captured. Caraka informed his wife that he could not join her in the next life, for he had a duty.

Two hundred years later, and two thousand miles away, the Spectre and Lady Beltane met again. A group of highwaymen found a woman in a green cloak traveling alone. They brought her to Lord Beltane, a fat old man who lived in a stone tower (this was Lady Beltane reborn). When the woman turned one of the highwaymen into a wolf, and devoured the others, Beltane realized she was really the Spectre. But again, Beltane escaped. And throughout the centuries, Beltane continued to elude the Spectre.

Beltane explains that she has watched the Spectre in his current incarnation. She knows that his thirst for justice has cost him everything, including the love of the two women he most loved: Clarice Winston and Amy Beitermann. Beltane then informs the Spectre that she has attained control over the living. Rather than allowing humanity to have free will, which often ends in bad choices, Beltane intends to force people to make good choices. With the Spectre's help, she can bring about an end to all evil—which is the Spectre's mission.

The Spectre is tempted, but he tells her that without evil there is no good. He also tells Beltane that she has misunderstood his mission. His purpose is not to purge evil but to confront it, comprehend it, and punish it. And whatever her intentions, Beltane is guilty of evil. The Spectre traps Beltane's soul. He then summons the souls of all the people Beltane has killed over the years and allows them to have their vengeance.

In the hospital's nursery, the baby dies as the Spectre leaves Beltane's soul.