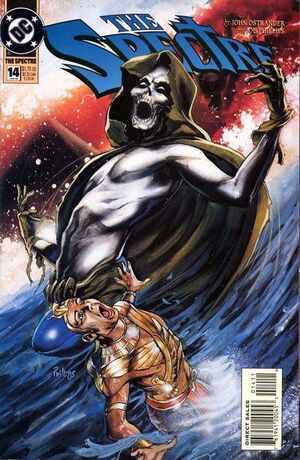 The Spectre's god is not your god of mercy, but of vengeance. And he rarely turns the other cheek.

Appearing in "Wrath of God"Edit

Synopsis for "Wrath of God"Edit

The Phantom Stranger visits Father Craemer at the Church of the Holy Sepulcher. He informs him that the Spectre has destroyed Vlatava because of his advice. Father Craemer refuses to break his vow by telling him what was said in the confessional.

The Phantom Stranger explains that God's wrath was originally known as Eclipso. Eclipso was responsible for the Flood, the only survivor of which was Noah and his ark. But in time, Eclipso overreached himself and was trapped in a gemstone. Then God brought forth a new spirit of wrath, the Spectre, who was responsible for many biblical catastrophes.

Flashback: Nabu, a court magician in ancient Egypt (and a Lord of Order), feels guilty that he did not stop the pharaoh from issuing a decree to kill all of the Hebrew children in Egypt. When the Spectre comes to punish the pharaoh, Nabu tries to stop him. But despite Nabu's power, the Spectre kills the pharaoh and escapes. The pharaoh's son takes over, and Nabu convinces him to spare the Hebrews' lives.

Years later, Moses insists that the pharaoh free the Hebrews. Against Nabu's advice, the pharaoh refuses. Many disasters befall Egypt. The Phantom Stranger visits Nabu and warns him that all of Egypt's firstborn children will die at the hands of the spirit of God's wrath, who Nabu faced earlier.

Nabu dons the Helmet of Fate and attempts to stop the Spectre. But with little effort, the Spectre strips Nabu of his power. Nabu returns to the pharaoh, who is holding his dead son. Nabu explains that this happened because of their pride. The pharaoh sends the Hebrews away but then decides to have them killed. After the Hebrews pass through the parted Red Sea, the Spectre causes the pharaoh and his soldiers to drown.

Present: The Phantom Stranger warns Father Craemer that the Spectre's god is not a god of mercy, but of vengeance.

Retrieved from "https://heykidscomics.fandom.com/wiki/Spectre_Vol_3_14?oldid=1458015"
Community content is available under CC-BY-SA unless otherwise noted.