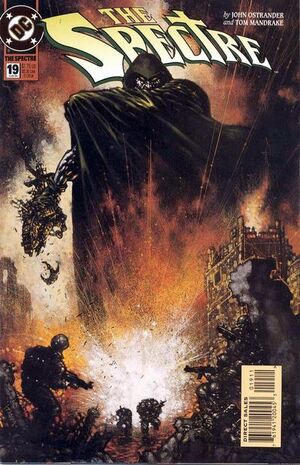 I heard absolute power corrupts absolutely. Does that mean God is corrupt?

Appearing in "Spear of Destiny, Part One: Afire"Edit

Synopsis for "Spear of Destiny, Part One: Afire"Edit

Naiad, a water elemental, recalls how she came to be. She was Mai Miyazaki, an environmental activist whose boat was set afire by the Japanese government when she was protesting an oil spill. As she was sinking into the sea, she made a pact with Gaea and became Naiad.

In New York City, an Orthodox Jewish sect has bought up tenements in Brooklyn, angering the community's black residents. Earlier in the year, the sect's leader, eighty-year-old Rabbi Jacob Schulman, lost control of his car and killed a black boy named Joseph Reynolds. A jury acquitted him of vehicular homicide, causing great anger in the black community. Police captain Matthew Taylor (a black man) is in charge of the police presence in front of the Jewish enclave. Taylor tells the media that they case may have been mishandled by Nate Kane. Kane confronts Taylor, telling him that things wouldn't have gotten so out of control if Taylor had given him even minimal support. When a reporter asks Kane to respond to charges that he bobbled the case, Kane has no comment.

Nearby, Jim Corrigan walks with Father Craemer. Jim explains that he finally understands his mission: confront evil in others so he can confront it better in himself. As they're discussing whether or not God is corrupt, Jim senses evil and turns into the Spectre.

A large group of black residents—led by Randolph Reynolds, the father of the boy who died—demands that Rabbi Schulman come out of the enclave. Inside the enclave, the Spectre visits Rabbi Schulman. The Rabbi admits that he is guilty; he did not hit the boy deliberately, but his pride would not allow him to give up driving. The Spectre decides not to condemn him.

Outside, the black residents demand justice. The Spectre tells them to disperse, since Rabbi Schulman has committed no sin. The Spectre also tells the Rabbi's bodyguards to disperse. The hate manifests itself in two creatures made of fire. The Spectre tries to stop them from fighting each other, but to no avail: a streetfight erupts between the blacks and the Jews. Azmodus appears and claims responsibility for unleashing the hate.

The Rabbi steps outside and apologizes to Randolph Reynolds, but Randolph doesn't accept his apology. The Spectre intervenes and shows each man how the other feels. The Rabbi's grief kills him, and Randolph holds him in his arms.

The Spectre vows to find Azmodus and destroy him. Elsewhere, Azmodus —hiding in the body of William Martindale —says that the Spectre will not find him until he grows much stronger.

At the White House, Bill Clinton introduces his staff to Nicodemus Hazzard, who was one of Clinton's professors at Oxford. Hazzard is informed that the Spectre was the one responsible for the destruction in Vlatava. Clinton asks for Hazzard's help in controlling or destroying the Spectre.

Retrieved from "https://heykidscomics.fandom.com/wiki/Spectre_Vol_3_19?oldid=1458022"
Community content is available under CC-BY-SA unless otherwise noted.