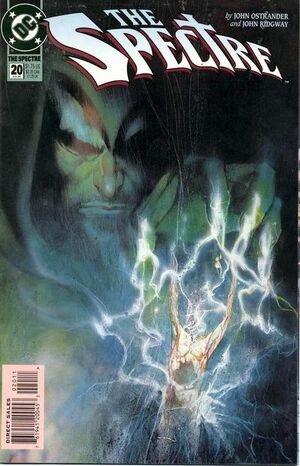 One last thing, Professor Hazzard. You've walked the corridors of dream, have you not? When you go back there again, would you tell them I miss the old dreams, the ones I had when I was younger... the ones that made me what I was?

Professor Nicodemus Hazzard pays a visit to an elderly Johnny Thunder. Johnny recalls the first time he met the Spectre. During World War II, as the heroes who would soon become known as the Justice Society of America were fighting the Nazis in the English Channel, the Spectre showed up and single-handedly defeated the Nazi warships. Johnny explains that the Spectre was unable to end the war because of the "zone of influence" in Germany, which caused anybody who used magic within the zone to become brainwashed by the Axis powers. Johnny, apparently suffering from Alzheimer's disease, cannot recall who created the zone of influence.

Professor Hazzard then visits Jay Garrick. Jay explains that during the war, the Spectre sensed "a sea of innocent blood being spilled" behind the zone of influence. After the war ended and the Nazi death camps became known, the Spectre was irate and demanded vengeance. However, the JSA feared that the Spectre's vengeance might entail killing every German; eventually, they convinced him to allow the war crimes tribunal at Nuremberg to act. Jay Garrick tells Hazzard that the Spectre never seemed the same after that incident. He became more distant and finally vanished for almost twenty years.

To find out why the Spectre vanished, Professor Hazzard visits Ted Grant at a boxing gym. Ted is reluctant to discuss the past, so he insists that Hazzard must beat him in a fight before he'll say anything. Hazzard gets in some good blows and knocks Ted to the mat, but Ted fights back and knocks down Hazzard. Ted finally agrees to talk, and he characterizes Jim Corrigan as a "hard bastard" who "never apologized for nothin'."

Hazzard then visits Carter and Shiera Hall, who tell him about a party on V-E Day. Despite the joyous occasion, Jim Corrigan was somber because of his inability to do the things that normal (i.e., living) people do, such as taste, feel, and smell. Corrigan said the only thing he can smell is blood. Shiera eventually convinced Jim to dance with her, but she soon ran back to Carter in fear because Jim was so cold. Carter was angry and demanded to know what Jim did to her. Carter explains that he and Jim have not been close ever since that incident. Years after the V-E party, Carter and Shiera summoned the Spectre so that they could see their son Hector, who had died while they were in limbo. The Spectre refused to bring Hector back, which greatly angered Carter and Shiera. Clearly shaken by the memory, they ask Professor Hazzard to leave.

Hazzard then visits Wesley Dodds, who describes one of his dreams that occurs over and over again. In the closing days of World War II, Hitler uses the Spear of Destiny to kill every member of the JSA—including the Spectre. As the Spectre dies, fire rains from the sky and the world ends. Then, after the war, the JSA end up in limbo, fighting the same battle over and over again to stave off Ragnarok. Dodds acknowledges that the last part really did happen. Dodds explains that Hitler attempted to invoke Ragnarok during the closing days of the war, but he didn't have the mystical energy to do so. Nevertheless, Hitler's curse is still on the Spear. Dodds says the Spear can definitely affect the Spectre, but he doesn't know where it is. As a final request, Dodds asks Hazzard to go to the Corridors of Dream and tell them he misses the old dreams—the ones he had when he was younger, which made him what he was.

Hazzard returns to his study and notes that the Spear of Destiny, according to sources, was the same spear that pierced Jesus's side on Golgotha while he hung on the cross. Hazzard could not find any clues as to the current whereabouts of the Spear, so he decides to search through non-ordinary reality. He enters the Dreaming and meets Lucien, the chief librarian. As Lucien brings him to the book he needs, Hazzard puts in a request from Wesley Dodds.

Retrieved from "https://heykidscomics.fandom.com/wiki/Spectre_Vol_3_20?oldid=1458023"
Community content is available under CC-BY-SA unless otherwise noted.