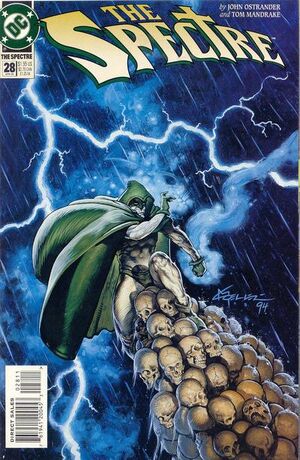 Feel it, O' Spectre! Feel the despair that I have carried for centuries!

Azmodus destroys the Church of the Holy Sepulcher in a huge explosion. He tells father Craemer that he doesn't want to kill him; he wants him to despair. He wants everyone touched by the Spectre to despair.

At the cemetery, Nate Kane and Captain Taylor investigate Amy Beitermann's grave, which is empty. The evidence points to the grave exploding outwards. Kane suspects the Spectre is somehow involved. As he leaves the cemetery, Azmodus (in the body of William Martindale) approaches him and gives him a gun. Azmodus says this gun will hurt the Spectre.

At the Marchebank residence, Douglas Marchebank III is concerned about his elderly mother, Clarice. She's becoming younger and stronger. She was originally well over 80-years old, but now appears to be in her 30s. She tells Douglas not to worry. Unfortunately, Douglas doesn't know that his daughter, Clarissa, is actually the one inside his mother's body, as the two bodies/souls were switched earlier.

Meanwhile, Clarice (now in the body of her granddaughter, Clarissa) sits in a prison and wonders why the Spectre doesn't help her. (The real Clarissa is accused of attempting to murder her grandmother. Thus, she is in jail.) Azmodus pays a visit and offers to switch things back in exchange for her shadow. She refuses, saying she won't surrender to despair. Unfortunately, her cellmates are already under Azmodus's influence, and they attack her.

Jim Corrigan visits Father Craemer at the Church of the Holy Sepulcher, which is now rubble. Jim offers to rebuild the church, but Father Craemer says that would be difficult to explain to his superiors. Then Bishop Anselm arrives and informs Father Craemer that the church was about to be closed anyway, due to low attendance. He also says that Father Craemer has been suspended from all priestly duties because there have been complaints about his orthodoxy. Jim suspects Azmodus was involved. He vows to find Azmodus and make him pay.

The Spectre blends his essence with everyone in New York City, just as he did at Christmas.[1] He finds that Azmodus has taken over hundreds of people, most of whom have committed murders. The Spectre begins killing these people to avenge their victims' deaths.

At the headquarters of Secari Corporation, William Martindale's office is a bloodbath. His employees are carrying out gruesome murders as though it were everyday business. Martindale calls the police and tells Lt. Nate Kane that a man in a green cap is killing all of his employees.

All over the city, people under the control of Azmodus are killing themselves, getting out of the Spectre's reach. Azmodus finally reveals his location to the Spectre; he is at Secari headquarters. Nate Kane is also on the way, hoping to save people from the Spectre. William Martindale's employees have been given some of Azmodus's newly gained power, so they are quite strong. Azmodus (in Martindale's body) explains that Clarissa Marchebank gave him her shadow, which allowed him to tap directly into the Spectre's power, and in turn making him a stronger foe.

As Nate Kane arrives, he witnesses several employees committing suicide, believing that they are serving the Spectre. He also sees Martindale erupt into flames. Nate then accuses the Spectre of killing Martindale, but the Spectre insists that he had nothing to do with it. Nevertheless, Kane shoots the Spectre with the gun that Azmodus gave him. The bullets rip into the Spectre, and Azmodus informs him that the bullets are actually seeds of doubt which will bind the Spectre with his own despair. Azmodus tells the Spectre to admit that humanity is unworthy. Once the Spectre admits his despair, he will become Azmodus, and Azmodus can become nothing. Just then, Nate Kane recognizes Azmodus as the one who gave him the gun. Kane is furious that he has been used. Azmodus thanks Kane for his help and offers him a gift: the reanimated corpse of Amy Beitermann.

Retrieved from "https://heykidscomics.fandom.com/wiki/Spectre_Vol_3_28?oldid=1684776"
Community content is available under CC-BY-SA unless otherwise noted.