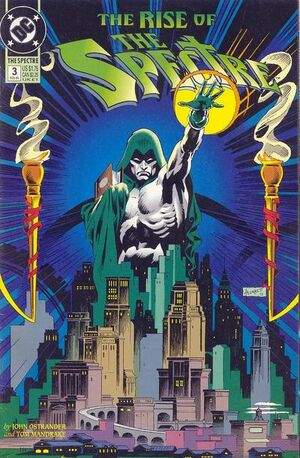 As for guilt... hey, that's for the courts or God to decide... the courts if they come quiet and God if they don't.

Appearing in "Crimes and Punishments"Edit

Synopsis for "Crimes and Punishments"Edit

Lt. Nate Kane turns down dinner with Amy Beitermann because he's too busy investigating the cement barrel that was fished out of the river earlier. As Amy walks down the hall to exit the police station, she removes a tarp from an object. She is shocked when she realizes that she's uncovered a plaster mold of Jim Corrigan's body.

Meanwhile, the police discover that the Reaver's victims have something in common: all of the women had AIDS. Over Nate Kane's objection, the police captain opts to withhold this information from the public.

Elsewhere, Daniel Geller turns down a date with a co-worker. He tells her she's "not his type."

Amy walks down the street wondering why she pulled the tarp off the plaster mold. Jim Corrigan walks up to her and she becomes startled. She tells him to go away, saying he's not even alive. Corrigan apologizes for scaring her and then explains that he's the Spectre.

As they talk, a group of thugs circle them and attack them. When the Spectre is about to kill the thugs, Amy begs him to spare their lives. He sees Clarice instead of Amy, and agrees to her request. He spares their lives but turns them into rats.

The Spectre then shows Amy Jim Corrigan's younger life. Jim's father, Jebediah, was a zealous, abusive preacher whose speeches about demons and frequent beatings caused Jim to be very afraid. Jim later became a callous, brutal cop. While he was busting an illegal gambling operation, he met a woman named Clarice Winston. Later, after several weeks of dating, Jim and Clarice got engaged. On the night of their engagement party, a two-bit snitch named Louis Snipe told Corrigan that head mobster Gat Benson would be at a robbery that evening. Rather than alerting his partner, Corrigan went alone so that he would get all the glory. It was a trap; the mobsters captured Corrigan, put him into a barrel, filled it with cement, and threw him into the river.

As Amy hears of Jim's past, she continually wants to intervene. However, these are only memories she's seeing. She soon realizes that nothing will be changed. She is witnessing first-hand the death of Jim Corrigan -- and the birth of the Spectre.

Retrieved from "https://heykidscomics.fandom.com/wiki/Spectre_Vol_3_3?oldid=1458001"
Community content is available under CC-BY-SA unless otherwise noted.