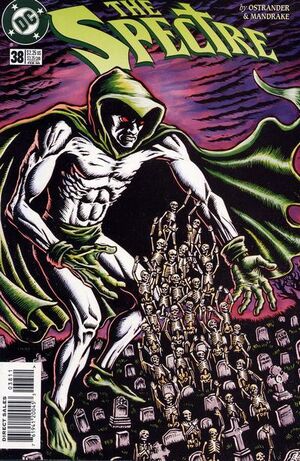 I have faced Hell... yet I could not meet what I saw in that man's eyes. Nothing. Literally. A void.

On the dream plane, Brother Jonathan (the proto–Uncle Sam) continues to beat the Spectre. Nicodemus Hazzard senses that someone has taken the talisman out of his hand in the real world. Special Agent Shadrach has a gun to Hazzard's head. Just as Hazzard wakes up, the Spectre's hand reaches out of Hazzard's eye and stops Shadrach's bullet. Shadrach tells the Spectre that he works for the national interest. The Spectre looks into Shadrach's eyes, which are completely black; he is terribly frightened and cowers in the corner. Shadrach tries to shoot Hazzard again, but the Spectre's cape blocks the bullet—even though the Spectre himself is still cowering in fear. Shadrach leaves with the talisman and warns them to stay out of his way.

The Spectre tells Hazzard that he saw nothing, a void—when he looked into Shadrach's eyes. Hazzard believes the void represents the true antithesis of everything the Spectre represents: "Hell is not Heaven's opposite, because it validates the other's existence. It is Heaven's rival but part of the same belief system. A void negates the entire Judeo-Christian mythos." Corrigan is truly shaken. He wonders if everything he believes is a lie.

Hazzard goes back to the dream plane to get more information on Shadrach and the talisman. He learns that the talisman was created by patriots and shamans in the early days of the American Revolution. Taylor Hawke was entrusted with the talisman's safekeeping. One night, Hawke was chased through the forest by a group of German mercenaries employed by Britain. They caught him and ran him through. As he lay dying, talisman in hand, Hawke wondered if his sacrifices would be worthwhile. An apparition—a spirit with a single eye instead of a face—appeared from the talisman. The apparition ensured Hawke that all would be well if he made one last sacrifice: he must bond his soul with it. Hawke agreed, and the Minuteman was born. The Minuteman continued to be an inspiration during the American Revolution. During the War of 1812, he was reborn as Brother Jonathan. During the Civil War, the talisman was split in two; consequently, the spirit split as well: it became Billy Yank and Johnny Reb. In the 1870s, a New York cartoonist named Samuel Adams created the image of Uncle Sam to protest Tammany Hall. Adams had both pieces of the talisman. After Adams got shot by a political rival, the Spirit of America made Adams the same offer that he made Taylor Hawke. Adams agreed, and Uncle Sam was born. Uncle Sam was reborn in both World Wars. But after World War II, America's vision of itself fragmented—as did the talisman.

Hazzard learns that America's vision is not the only thing that is fragmented; the talisman itself is flawed. Suddenly, Hazzard sees Special Agent Shadrach, who tells Hazzard that he has learned too much to be allowed to live.

Retrieved from "https://heykidscomics.fandom.com/wiki/Spectre_Vol_3_38?oldid=1458056"
Community content is available under CC-BY-SA unless otherwise noted.