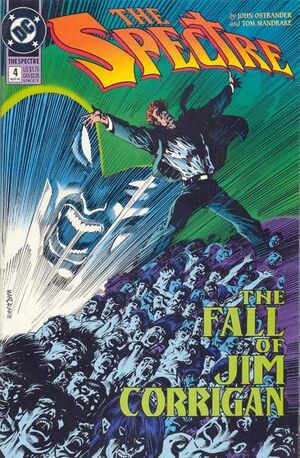 And so I died... encased in cement and thrown into the river. So I was born, for that which ended my mortal existence began my true life, my afterlife, as the Spectre.

Appearing in "Crime and Judgment"Edit

Synopsis for "Crime and Judgment"Edit

The Spectre continues to tell Amy Beitermann his origin.

Flashback: After Jim Corrigan died in the cement-filled barrel, he went to Limbo and demanded justice. In Limbo, he confessed, "I've seen damn little of God's justice in the world! Mine I know exists." Since he passed his own judgment, he was not worthy of Heaven. He was not deserving of Hell, either, so his spirit was sentenced to walk the earth, confronting evil and try to comprehend it.

Meanwhile, Corrigan's partner, Waylon Grant, took Jim's fiancee, Clarice, to the warehouse where Corrigan went missing. They're captured and are about to be killed by Gat Benson. However, Corrigan suddenly appears and tries to stop him. During the fight, a bullet hits Clarice. Using his new "Spectre" powers, Corrigan melts Benson, killing him. He then enters Clarice's soul as she is dying. He is able to bring her back to life before she enters Heaven.

Present: Upon hearing this story, Amy Beitermann is outraged that Corrigan forced Clarice to come back to the land of the living.

The Spectre then tells Amy that he later broke off his relationship with Clarice, and he doesn't know if she ever made it to Heaven. Amy yells at him, criticizing his hubris. The Spectre then enters Amy's soul to prove that evil exists within everyone.

Flashback: Her father died in a war when she was young. After that, She and her mother often argued about the men her mother brought home. When she was 18, her mother died. At 25, she met Ted James. The two married, but she soon discovered that he was cheating on her. She divorced him. As a way of dealing with her grief, she began sleeping around. Later, she learned that Ted had AIDS. He had transmitted the disease to her, and she had unknowingly infected many of the men she slept with.

Present: The Spectre thinks Amy deserves punishment, but she points out that guilt is not the same as evil, and the Spectre's mission is to confront evil. She then asks him whether he has confronted the evil within himself, and he admits that he has not.

Within his own soul, Corrigan confronts his father and says he does not forgive him. He whips his father with a belt, just as his father whipped him when he was young.

After his soul searching, he apologizes to Amy, telling her he should not have entered her soul. She forgives him, on the condition that he forgives himself. He says he doesn't think he can do that, but she comforts him by stating that we all make mistakes, we're all human -- even Jim Corrigan.

Retrieved from "https://heykidscomics.fandom.com/wiki/Spectre_Vol_3_4?oldid=1502351"
Community content is available under CC-BY-SA unless otherwise noted.