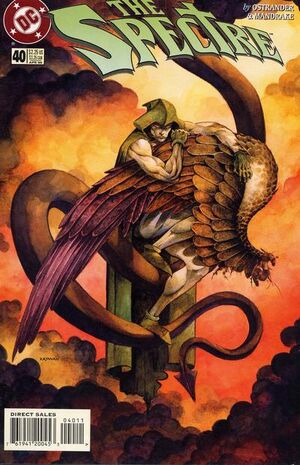 My real name no longer matters. Once I was a Carib Indian but it was as the pirate Captain Fear that I was known... and damned.

In the Caribbean Sea, a large ship attacks a smaller vessel. The smaller ship is filled with Cuban refugees, and the men aboard the large ship kill them all. Suddenly the Spectre appears, furious at the loss of life. He kills all of the pirates, but not before finding out the name of the man who hired them: Richard Yount, a New York businessman. Yount has been taking Cubans' money, promising to help them escape, but dumping them at sea. The Spectre is about to pursue Yount, but then he notices an old ship sailing in the fog. The ship is helmed by Captain Fear. When he asks the Spectre his name, the Spectre cannot remember and begins to turn into Jim Corrigan. Captain Fear explains that the curse upon his ship prevents everyone but him from remembering.

Centuries ago, Captain Fear was a simple Carib Indian. After being enslaved by Spaniards, he led a revolt and became a pirate known as Captain Fear. He vowed to treat the Spaniards as he was treated by them. One day he agreed to join forces with Baron Hemlocke. The two men led an attack on the Spanish town of San Bartolemo, and Hemlocke proceeded to slaughter all in his path. After the raid, the two ships were separated in a storm. When Captain Fear finally arrived at their rendezvous point, he saw Baron Hemlocke's ship pulling out of the cove. He had killed Captain Fear's wife and unborn child. Captain Fear vowed revenge. While at sea, Captain Fear and his crew came across a strange ship—only to discover that it was themselves. The other Captain Fear said "Go back," and then the ship moved on. But Captain Fear ignored the advice, and his ship soon came under attack by Baron Hemlocke. Hemlocke had made a deal with the devil, and he had demons fighting on his behalf. Captain Fear decapitated Hemlocke, but when he returned to his ship he found that his crew had turned into zombies. Then Hemlocke's head spoke and told Fear that he had made a deal with the devil: he would be reborn. Because Captain Fear had vowed to not rest until Hemlocke's soul was in Hell, Captain Fear was doomed to wander the seas forever.

Upon hearing this story, Jim Corrigan briefly wonders about the object in his pocket—a small talisman—but the memories fade as quickly as they arrived.

In New York City, Richard Yount tells his assistant about his dreams. He is a pirate who butchers children and rapes men and women as he strangles them. The dreams started when he obtained his lucky charm—a small blue object with a star on it. Yount suddenly realizes that he is Captain Hemlocke, and his dreams were actually memories. Meanwhile, Captain Fear's ship arrives in New York Harbor.

Retrieved from "https://heykidscomics.fandom.com/wiki/Spectre_Vol_3_40?oldid=1458060"
Community content is available under CC-BY-SA unless otherwise noted.