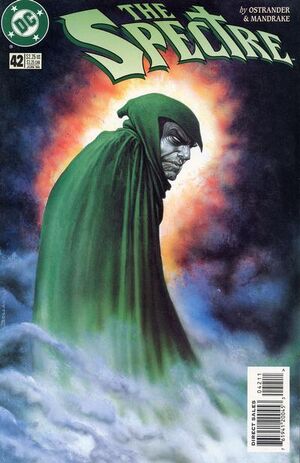 I will hear their cries. What is it you want? What calls you from your rest?

Appearing in "The Poisoned Land"Edit

Synopsis for "The Poisoned Land"Edit

The year is 1788; the setting is a Negro cemetery in New York City. Alexander Hamilton asks a man if he has the American talisman. The man says he has it; he is the cousin of Taylor Hawke, the alchemist who helped create it. The man and his daughter look on as their slaves lay someone to rest. Barnabas, one of the slaves, declares that the deceased was named N'Toma, and no one should ever disturb his bones.

In 1935, a man is digging the foundation of a new building and finds the graveyard. Jim Corrigan is called to the scene. He reminisces about Rafe, a black kid he was friends with when he was young. Jim's parents didn't approve of the fact that he was friends with a black person. Rafe and his mother were forced to leave.

The property owner shows up and asks Jim if there is a legal reason why he can't pour cement over the grave. Jim disapproves but admits that the man can do what he wants on his land.

In the present day, a black woman named Anna Tsange goes to the General Services Administration Building. Her daughter Sojourner goes with. While Anna goes to a meeting with her ex-husband, Sojourner sits in the lobby and sees Barnabas. She shows him the lucky stone that her grandfather gave her. He tells her it is a very important stone and that she must not let anyone take it. While Anna meets with her ex-husband Randall in his office, a scream comes from the lobby. The ghosts of African slaves fill the room, terrifying the white people in the building.

At the midtown police station, Nate Kane asks Captain Taylor if he can come back to work. Taylor refuses the request, since Kane just got out of the hospital. Jim Corrigan shows up and tells Taylor why he was shot: the National Interest was after the piece of the American talisman that Kane had. Kane agrees to help Corrigan locate the remaining pieces. Captain Taylor bursts into the room and informs them about a situation at the General Services Administration Building. Corrigan turns into the Spectre and goes to the building.

At the GSA Building, Shadrach shows up and confronts Anna, Randall, and Sojourner. He demands that they give him the piece of the talisman.

Elsewhere in the building, the Spectre asks the ghosts why they're assaulting the living. Barnabas explains that they are merely crying out, but their voices are not heard so they cry out louder. The ghosts are still bound to the bones that are entombed beneath the building's foundation—but they want their freedom. Barnabas says that the American talisman has called forth the spirits. The Spectre calls forth the bones and tells them to take that which belongs to them. The bones rise into the air and fly back to Africa.

Just as Sojourner is giving the fragment of the talisman to Shadrach, the Spectre steps in and slices him into dozens of pieces. However, Shadrach's hand scurries away, holding the piece of the talisman.

Retrieved from "https://heykidscomics.fandom.com/wiki/Spectre_Vol_3_42?oldid=1458064"
Community content is available under CC-BY-SA unless otherwise noted.