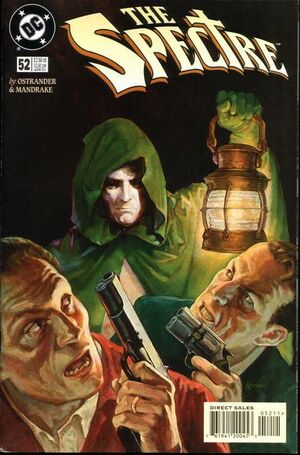 The case goes all the way back to 1928! Only... according to the newspapers... it was the mother who was murdered and then, later, the daughter was missing! According to the files, one of the suspects was a rookie detective by the name of... Jim Corrigan!

Appearing in "The Haunting of Jim Corrigan – Part One: Retribution"Edit

Synopsis for "The Haunting of Jim Corrigan – Part One: Retribution"Edit

Nate Kane, who is fused with the Spectre, finds himself on the Manhattan Bridge. As half of Nate's body turns into Jim Corrigan, he cannot stop himself from shooting a woman named Julia. She falls off the bridge, yelling Jim's name.

Nate wakes up, realizing it was a dream. The Spectre flies out of Nate's eyes, and Nate asks Jim Corrigan who Julia Edmonds is. Nate figures he got caught up in one of Jim's memories, and he suspects that Jim killed Julia many years ago.

At Attica Prison in upstate New York, the Spectre visits Jackson Holden in prison and kills him as a punishment for murdering a fellow inmate. The Spectre then turns his attention to Andrew Craig, a prison guard who beat an inmate to death. Next, the Spectre kills Filemon Escobar, a drug dealer. The Spectre continues his rampage, killing inmates and guards alike. However, he spares one man on death row, Michael Fulton, who the Spectre knows is innocent. Nevertheless, the Spectre refuses to tell the authorities that Michael is innocent; he says it is a matter of temporal justice.

In Morristown, New Jersey, the Spectre drops in on Father Craemer. Jim Corrigan tells Father Craemer about his actions at Attica and says he is afraid that he is losing control. He suspects it started when he comforted Gaea during the Final Night. Jim then recalls his past: he lied about his age to fight in the First World War, thinking it would be glorious—but it turned out to be nothing but mud and cold and death and fear. He worked on the docks when he came back to the United States. He spent some time as a pugilist, but he quit fighting after he refused to take a dive. Determined to clean up the world, Corrigan became a cop. However, his determination ended up getting him killed, and he ended up drowning in a barrel of cement. Father Craemer suspects that Jim is changing and having an internal crisis.

Nate Kane finds the file for Julia Edmonds and discovers that her case goes all the way back to 1928. However, the newspaper clipping says that Julia's mother was the one who was murdered, and Julia went missing. One of the suspects was a rookie detective named Jim Corrigan. Captain Taylor enters Nate's office and assigns him to the Attica Prison case. Nate must find out what set off the Spectre and prevent it from happening again.

At New York Municipal Court, Jim Corrigan talks to Shawnee Rhodes, who is Michael Fulton's public defender. She informs him that the state will execute her client at midnight. Because the Spectre is not a legal entity, his actions do not constitute sufficient reason to stay Michael's execution.

Inside the execution chamber, the doctor is preparing to administer the lethal injection. The Spectre appears and tells him that Michael is not guilty. He says he is not there to stop the execution, but he warns the doctor that he will avenge Michael's murderer if he is put to death. The Specter even says he will hold the state of New York accountable. Shawnee Rhodes reminds the prison warden about the Spectre's actions in Vlatava, and this is enough to convince him to call the governor and ask for a stay of execution.

Back at his apartment, Nate Kane gets into bed. He is determined to find out more about Julia Edmonds. Jim Corrigan arrives and, much to Nate's delight, enters Nate's soul. Nate will now be able to find some answers.

Retrieved from "https://heykidscomics.fandom.com/wiki/Spectre_Vol_3_52?oldid=1458076"
Community content is available under CC-BY-SA unless otherwise noted.