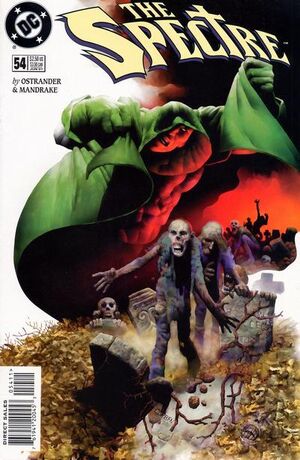 A void exists and needs to be filled. No one can ever be replaced. Not your wife, not Terry Sloane, but their passing leaves a void that needs to be filled. Mr. Terrific served a purpose and that purpose isn't filled by Superman or Batman or even the Spectre. He worked at the street level. There is a need for that kinda hero today. You game?

Appearing in "The Haunting of Jim Corrigan (Part 3): Atonement"Edit

Synopsis for "The Haunting of Jim Corrigan (Part 3): Atonement"Edit

While contemplating suicide after the accidental death of his wife, Michael Holt is confronted by Spectre, who tells him about Terry Sloane, the Golden Age superhero known as Mister Terrific.

Retrieved from "https://heykidscomics.fandom.com/wiki/Spectre_Vol_3_54?oldid=1458078"
Community content is available under CC-BY-SA unless otherwise noted.