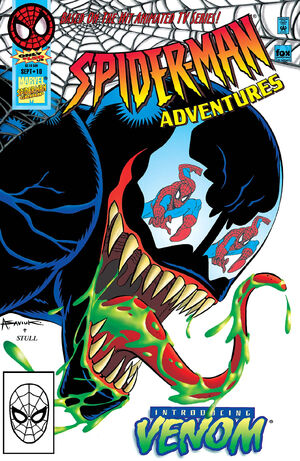 Appearing in "Coming Of Venom!"Edit

Synopsis for "Coming Of Venom!"Edit

As Spider-Man is swinging through the city, he is ambushed by Rhino and Shocker, who defeat him and bury him under a pile of rubble. However, they are themselves defeated and webbed up by Venom, who fights Spider-Man himself, seeking revenge on the wallcrawler for Eddie Brock's ruined life and Peter Parker's rejection of the symbiote. Venom webs him up, unmasks him and threatens to reveal his identity to the public. However, Spider-Man escapes, but worries that Venom now presents a threat to his Aunt May and girlfriend Mary Jane Watson.

Venom proves to be a relentless, unforgiving opponent, but Spider-Man manages to lure him to the launch site of the John Jameson space probe, where the noise of it blasting off forces the symbiote to separate from Brock. Spider-Man then webs the symbiote to the probe before it is launched, sending the symbiote back into outer space with the probe.

Retrieved from "https://heykidscomics.fandom.com/wiki/Spider%C2%AD-Man_Adventures_Vol_1_10?oldid=1695132"
Community content is available under CC-BY-SA unless otherwise noted.