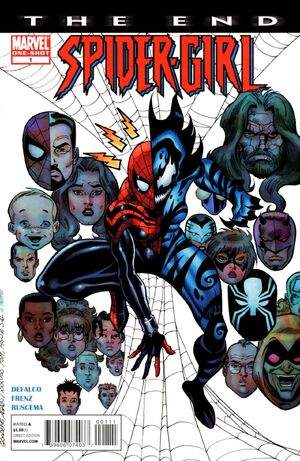 It's my turn to play hero. I've seen the FUTURE--and it needs you!

Appearing in "The End of Spider-Girl!"Edit

Synopsis for "The End of Spider-Girl!"Edit

The Spider-Girl Saga concludes with May sacrificing herself to save April's life. However, in the far future, a future incarnation of April uses Doctor Doom's time machine to return to the present and convince her past self to act responsibly. She does and saves Mayday's life at the cost of her own and at the cost of the future that came to be. May is later united with Wes, who reveals that he does indeed know May's true identity and they kiss, beginning a relationship.

Retrieved from "https://heykidscomics.fandom.com/wiki/Spider-Girl:_The_End!_Vol_1_1?oldid=1453520"
Community content is available under CC-BY-SA unless otherwise noted.