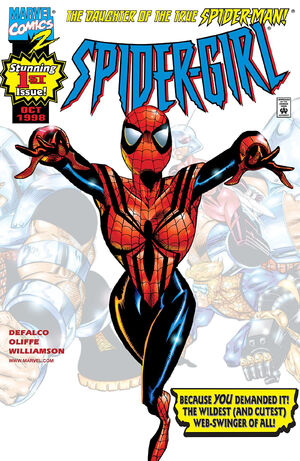 You try to picture the puzzled expression on your dad's face when he suddenly realizes that his stalker has vanished and you have to smile because you really enjoy playing his guardian angel.

May "Mayday" Parker is still trying to reason with her new found powers and whether or not she should continue to use them in a superhero capacity. She begins to "research" Spider-Man and ends up talking to her fathers assistant, Phil Urich. Phil informs her the legacy of Spider-Man as some speculate, about how a freak accident lead to his creation and how he was first in entertainment until a burglar he let go killed someone close to him. Before long, Peter shows up and, as he, May, and Captain Ruiz are leaving the precinct, Peter and May feel their spider-sense tingling. A suspicious man begins to follow Peter and Captain Muiz, but May ambushes the man into an alley. Scurrying up a wall, she avoids letting the man see her as she tails him as he goes into a clothing store. She decides to leave the man be since he didn't commit any crime that she saw. Back at school, her friend Davida Kirby tries to get her to loosen up by going to the mall after basketball practice, but May is down because she starts to feel using her powers on the court is too much of an advantage to exploit.

At home over dinner, Peter talks about how he is working on a case with mobsters dealing with the fashion industry. May begins to think there may be a connection with the man since he went into a clothing store. Donning a make-shift black costume and using some web shooters she kept hidden, she takes to the city. Infiltrating the clothing store, she finds her man, Shaky, being grilled by his employer, the masked Mr. Nobody. She takes them on until Captain Ruiz and the police show up. May makes it out the window and Mr. Nobody is able to teleport out as well. Mr. Nobody then shows up in the prison cell of none other than the Kingpin to tell him about what happened. Back at the Parkers, May waits in her room, pretending to be asleep, for Peter to come and talk to her. He doesn't and over the next few days, she begins work on her very own costume as the issue comes to an end.

Retrieved from "https://heykidscomics.fandom.com/wiki/Spider-Girl_Vol_1_1?oldid=1453473"
Community content is available under CC-BY-SA unless otherwise noted.