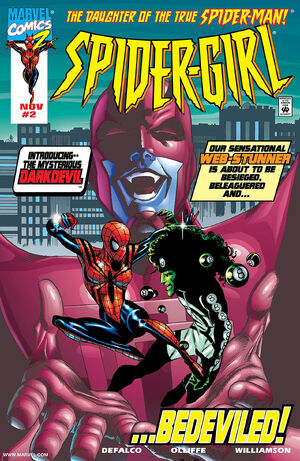 Do you really have what it takes to wear your father's webs?

-- May "Mayday" Parker (thinking to herself)

This issue begins a few weeks after the first one. May is fighting some thugs when her Spider sense goes a little wonky as she notices a figure on a rooftop. Before she could find out who/what it is, she is attacked by Crazy Eight. May begins to worry because she didn't think she would be facing off against a real super villain. Still not up to superhero standards yet, May decides retreating would be her best shot. While recovering on the rooftops as the thugs get away, May is waylaid by Darkdevil, a strange new version of the Daredevil.

He does identify himself as a vigilante like May, but says the streets are not for the faint of heart and finds May lacking as a superhero. He then proceeds to attack her. He leaves her with an invitation to met him at Pier 87 the next night if she truly thinks herself ready to be a hero. Racing back home, she starts to feel more and more self-doubt. Peter and Mary Jane both lie awake in their room thinking about what is happening with May. The next morning, she overhears them talking about Peter mentioning something at their lunch date. At school, May's friend Jimmy is accosted by the jock Moose Mansfield right as Jimmy was about to ask May something. When Coach Flash Thompson breaks up the two, Jimmy just walks away. May goes to meet her father at Midtown South Police Department, but only finds Phil Urich instead. He tells her about the webbing he found at the scene from the first issue. May asks him not to tell her father and he agrees for some reason. May and Peter then go to an awkward and silent lunch together.

Back at MHS, Jimmy had agreed to fight Moose while May was gone. May takes matters into her own hands and shoves Moose into a locker so he will miss the fight. Jimmy becomes perturbed again, since he thinks May did something. That evening, May makes her way to Pier 87 to see that Darkdevil's test is actually Crazy Eight and his thugs from the previous evening. She takes him on and holds her own for awhile before he uses a sonic ball, which disrupts her equilibrium. May seems to retreat, which puts Crazy Eight at ease, but she comes from behind him and knocks him out. May gloats a bit over his unconscious body before the Darkdevil shows up, stating that he wants to save her from a funeral before leaving. The issue ends with May contemplating all of the complications no facing her, including having to fill her fathers tights and namesake.

Retrieved from "https://heykidscomics.fandom.com/wiki/Spider-Girl_Vol_1_2?oldid=1453474"
Community content is available under CC-BY-SA unless otherwise noted.