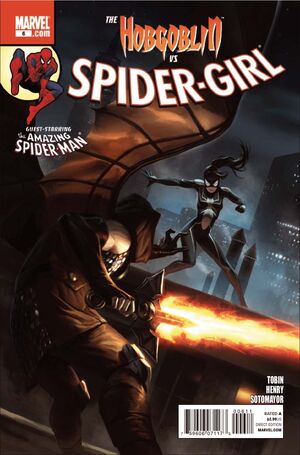 Spider-Girl is fresh off her battle with the grim huntress, Ana Kravinoff, and determined to do a little hunting of her own… setting her sights on the new Hobgoblin! But this Hobgoblin has a few surprises in his bag of tricks, and Anya Corazon may need the help of a friend to win the battle… or even survive. Guest starring Spider-Man!

Retrieved from "https://heykidscomics.fandom.com/wiki/Spider-Girl_Vol_2_6?oldid=1730356"
Community content is available under CC-BY-SA unless otherwise noted.