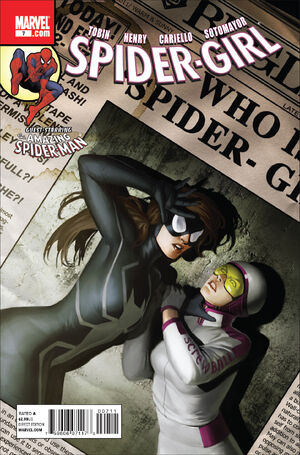 Appearing in "The Raven's Nest"Edit

SPIDER-GIRL – REVEALED! Who is Spider-Girl? That's what Raven, a mysterious organization tied to her father's death wants to know! As our web-slinging wonder defends the streets, this organization has been lurking – and watching her, waiting to strike! With a world against her, can Spider-Girl survive?

Retrieved from "https://heykidscomics.fandom.com/wiki/Spider-Girl_Vol_2_7?oldid=1723738"
Community content is available under CC-BY-SA unless otherwise noted.