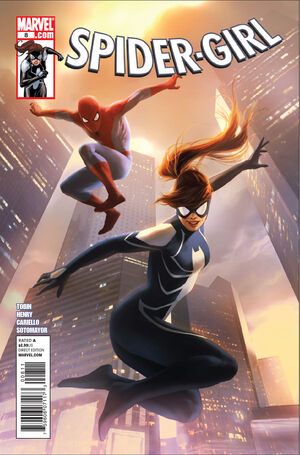 Appearing in "Learning to Fly"Edit

FINAL ISSUE! with her roommate kidnapped and her life on the line, Spider-Girl uncovers the true identity of her father's murderer, but will the knowledge force her into an action that she'll regret for the rest of her life? It's all more pressure than any normal 16 year old girl could bear, but what if Spider-Girl wasn't normal anymore? A shocking change in the life of Anya Corazon awaits in this fate-filled issue!

Retrieved from "https://heykidscomics.fandom.com/wiki/Spider-Girl_Vol_2_8?oldid=1637545"
Community content is available under CC-BY-SA unless otherwise noted.