Start a Wiki
Part of the 'Greater Power' story arc 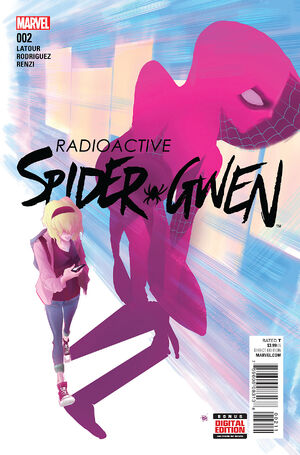 At the Parker household, George Stacy chats with Ben Parker, telling him that he's close to finding Peter's killer but that Spider-Woman is innocent.

On the surface, Hawkeye watches from a rooftop as Jean DeWolff talks with Mr. Albie, and complains to Director Carter over a com-line over not being allowed to fight, but Director Carter gives him a direct order to not intervene or shoot anyone. Mr. Albie tells DeWolff they should let the Lizards be, but DeWolff states that she was asked to investigate by an old friend.

In the subway tunnel below, Spider-Woman webs Pine Cone to the ceiling and turns to see Captain America get slashed by the Lizard. She intervenes, telling him to take control and stop repeating Peter's name. She picks up Captain America's shield and uses it to deflect a blow, but has a flashback to Peter's death and drops the shield, collapsing to the ground. As the Lizard is about to attack her, DeWolff arrives and opens fire. Unharmed by the bullets, the Lizard lunges at her, but is slashed across the chest and knocked back by Redwing, Hawkeye's robotic falcon.

Later, Hawkeye berates Captain America for letting Spider-Woman go, but Captain America retorts there is a chain of command and then berates him for letting DeWolff follow him and compromise the site. Hawkeye responds that Director Carter cleared her, and DeWolff interrupts saying there is a direct link between her case and what S.H.I.E.L.D. has found. Pointing at Connors, she says that he disappeared when the Lizard incident happened and with the ongoing Spider-Woman manhunt there's been no effort put into finding him or the Lizard, stating that from the looks of it they're one-and-the-same. Captain America corrects her, stating that Connors was one of many test subjects turned into living weapons by a shadow cell called S.I.L.K., and that based on Spider-Woman's reaction the Midtown High Lizard was Peter Parker.

At the Parker household, Ben expresses confusion over George's statement, and George says that while he promised Ben and May he'd find Peter's killer and bring them to justice, he was removed from the case. He insist that Castle is wrong and that Spider-Woman is innocent, but that if he keeps pushing they'll take more than his badge away. Ben accuses him of quitting, but George states that he will find the truth, but that he's concerned that Ben and May might not be able to handle it. Ben snaps that he and May deserve to know what really happened to Peter, and that it's not George's job to protect them anymore.

In an alleyway, Spider-Woman perches on the edge of lid of the Bodega Bandit's dumpster, saying goodbye to Pine Cone. Noticing the Bandit approaching, she tells him to be careful since it was extremely difficult tying on a mask in handcuffs. She tosses Pine Cone - dressed in a bandit mask and hat - to the Bodega Bandit and swings off into the night, leaving him overjoyed and holding his new pet.

• As if that wasn’t bad enough, Spider-Gwen finds herself on SHIELD’s most wanted list!

Retrieved from "https://heykidscomics.fandom.com/wiki/Spider-Gwen_Vol_2_2?oldid=1652334"
Community content is available under CC-BY-SA unless otherwise noted.