Part of the 'Spider-Women (Event)' event 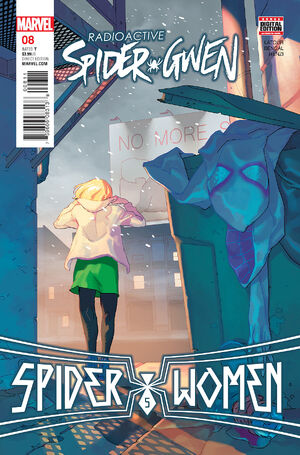 • The Spider-Women return to the Marvel Universe!

• Silk’s homecoming is cut short, though, when they learn that CINDY MOON of EARTH-65 has paid the MU a visit, too, and she’s caused a few problems for ALL of the Spider-Women.

• Gwen’s universe has now made itself known-- and it can’t go well for her.

Spider-Women Reading Order Checklist on How to Love Comics.

Retrieved from "https://heykidscomics.fandom.com/wiki/Spider-Gwen_Vol_2_8?oldid=1652342"
Community content is available under CC-BY-SA unless otherwise noted.