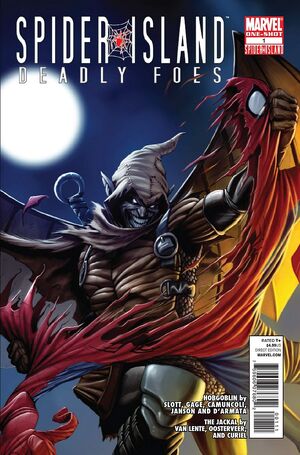 Appearing in "Out of the Picture"Edit

THE DEADLY FOES OF SPIDER-MAN ARE UNLEASHED ON SPIDER-ISLAND! The JACKAL is back and with the entire population of Manhattan quarantined, he has the perfect control for his twisted experiments. The hypothesis? If GWEN STACY returns, then Peter Parker can't be too far behind. Elsewhere in the city, the HOBGOBLIN attacks young love-but he better be prepared to meet his match when he faces super powered reporters! This deadly duo of sensational stories reveals the secret schemes of the fearsome foes of Spider-Island!

Appearing in "What I Did for Love"Edit

Synopsis for "What I Did for Love"Edit

Retrieved from "https://heykidscomics.fandom.com/wiki/Spider-Island:_Deadly_Foes_Vol_1_1?oldid=1728394"
Community content is available under CC-BY-SA unless otherwise noted.