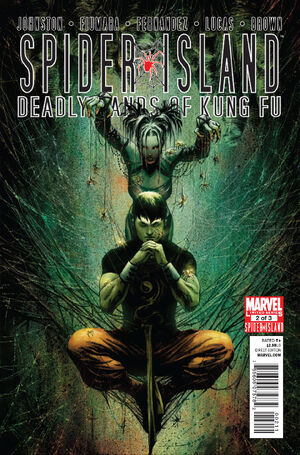 Appearing in "Web of Deceit"Edit

Synopsis for "Web of Deceit"Edit

When trying to figure out what his recurring dream means, Shang-Chi learns from Silver Sable that she has found possible locations in Manhattan for Bride of Nine Spiders's lair. Although Shang-Chi manages to defeat Bride of Nine Spiders and frees Iron Fist, he discovers that the person behind this is actually the demon Ai Apaec who is seeking to feed off the Immortal Weapons.

Harrowing horror and kung-fu kicking! Guest-starring Iron Fist, the Immortal Weapons, and more! The spider-powered infestation of Manhattan is in full disgusting swing…and in the midst of the outbreak, Shang-Chi discovers that even if we all survive Spider-Island, humanity itself faces the doomsday threat of an abominable monster! Antony Johnston (SHADOWLAND: BLOOD ON THE STREETS) and Sebastián Fiumara (LOKI) bring you this genre-smashing horror-fu adventure!

Retrieved from "https://heykidscomics.fandom.com/wiki/Spider-Island:_Deadly_Hands_of_Kung_Fu_Vol_1_2?oldid=1453527"
Community content is available under CC-BY-SA unless otherwise noted.