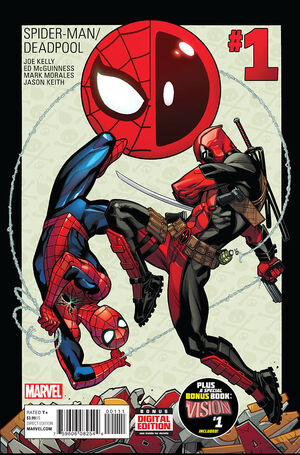 • The Merc-y Neighborhood Deadpool? The Spider with a Mouth? Close enough. THE TWO MOST POPULAR CHARACTERS IN THE WORLD TOGETHER FOR THE FIRST TIME! (That’s a lie.) Deadpool loves Spider-Man. Spider-Man hates Deadpool. If my math is correct, that makes them the perfect team, but what brings these two together? You’re going to have to read this book to find out, but Joe Kelly (AMAZING SPIDER-MAN, DEADPOOL) and Ed McGuinness (DEADPOOL, AMAZING X-MEN, HULK, a certain team-up book at the Distinguished Competition) are together again and will blow your mind with the last page of the first issue!

Retrieved from "https://heykidscomics.fandom.com/wiki/Spider-Man/Deadpool_Vol_1_1?oldid=1651838"
Community content is available under CC-BY-SA unless otherwise noted.