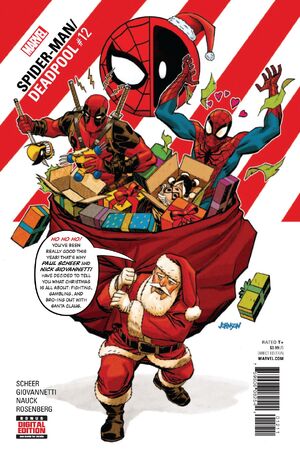 • A special guest-issue while Joe Kelly and Ed McGuinness prime the grand climax of their first uber-arc!

• It’s the holidays and both our heroes are alone…

• …which means they’re the only ones who can SAVE CHRISTMAS!

• That’s right, the holiday is under attack… from the least likely of places!

Retrieved from "https://heykidscomics.fandom.com/wiki/Spider-Man/Deadpool_Vol_1_12?oldid=1651853"
Community content is available under CC-BY-SA unless otherwise noted.