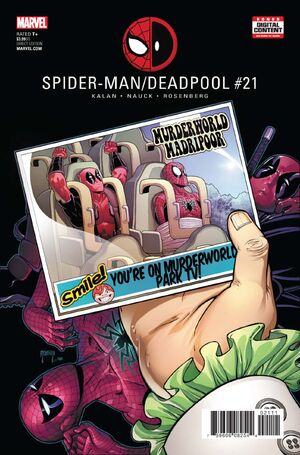 Appearing in "One Night In Madripoor Makes Spider-Man Humble"Edit

• When the villainous ARCADE decides to build a second, even deadlier Murderworld in Madripoor, he kidnaps Spider-Man and forces him to be the park’s first guest!

• Deadpool, meanwhile, has a bone to pick with Arcade... Namely that his terrifying theme parks are besmirching murder and its good name!

Retrieved from "https://heykidscomics.fandom.com/wiki/Spider-Man/Deadpool_Vol_1_21?oldid=1651863"
Community content is available under CC-BY-SA unless otherwise noted.