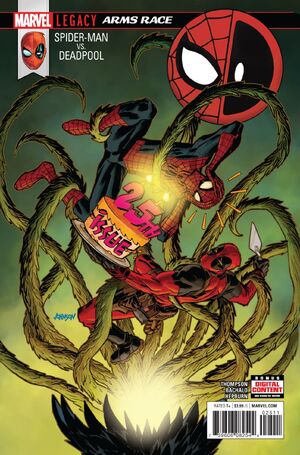 • The first arc of the new era of SM/DP climaxes with our heroes facing THE CHAMELEON!

• The mimicry villain’s plan is more than just changing HIS appearance. It takes Chameleon from his level of petty crook and puts him shoulder to shoulder with the world’s most terrifying super villains!

• Spider-Man and Deadpool do their darnedest to take down the elusive villain, but it’s hard to punch someone when he could look like anyone!

Retrieved from "https://heykidscomics.fandom.com/wiki/Spider-Man/Deadpool_Vol_1_25?oldid=1651872"
Community content is available under CC-BY-SA unless otherwise noted.