Start a Wiki
Part of the 'My Two Dads' story arc 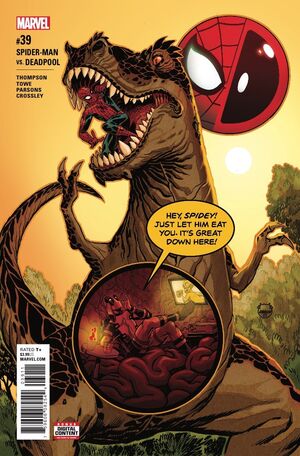 • When raising a child, you need to show them the world. What thoughtful parent WOULDN’T introduce that child to the most dangerous spot on the whole planet?

• Uh-oh. Well, anyway, Spider-Man and Deadpool visit THE SAVAGE LAND with the Master Matrix. Introducing the most powerful young robot in the world to the most volatile area couldn’t go wrong, could it?

Retrieved from "https://heykidscomics.fandom.com/wiki/Spider-Man/Deadpool_Vol_1_39?oldid=1651888"
Community content is available under CC-BY-SA unless otherwise noted.