Start a Wiki
Part of the 'The Manipulator' story arc 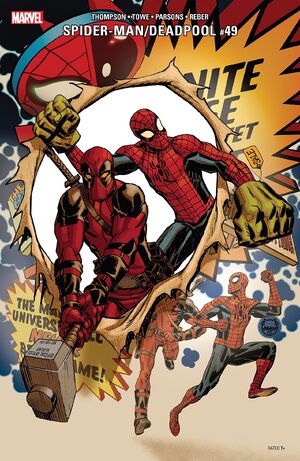 THE EVENT SO BIG ONE COMIC BOOK/REALITY CANNOT CONTAIN IT!

• Make sure the roof you read this issue under is well-supported, because we’re gonna DESTROY THE FOURTH WALL.

• The danger is coming…FROM THE OTHER SIDE OF THE PAGE!!!

Retrieved from "https://heykidscomics.fandom.com/wiki/Spider-Man/Deadpool_Vol_1_49?oldid=1655004"
Community content is available under CC-BY-SA unless otherwise noted.