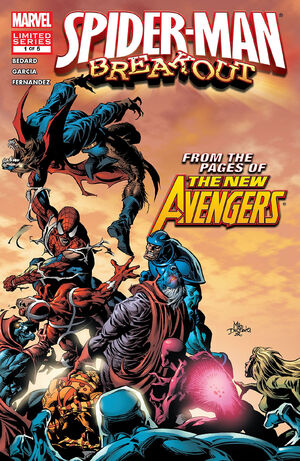 Appearing in "Breakout: Part 1 of 5"Edit

Synopsis for "Breakout: Part 1 of 5"Edit

At the Vault certain villains with similar powers have formed alliances.When the U-Foes have planned an escape, Vector had put his trust in Crossfire who double crosses him. Later following the events of the New Avengers when Electro caused a diversion at The Raft on Rykers Island, allowing many Supervillains to escape, The U-Foes and Crossfire's Crew split from the rest and follow the trail of the same person who double-crossed them. Spider-Man gets caught in between the feuding villains.

Retrieved from "https://heykidscomics.fandom.com/wiki/Spider-Man:_Breakout_Vol_1_1?oldid=1727087"
Community content is available under CC-BY-SA unless otherwise noted.