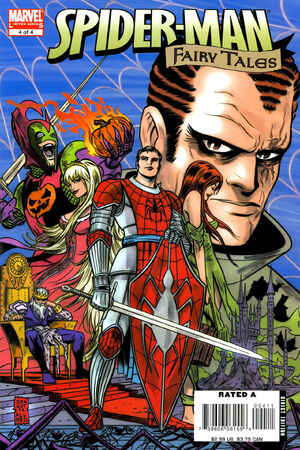 I now present to you the newest knight of the royal kingdom... Sir Peter Parker!

Appearing in "What You Wish For"Edit

Synopsis for "What You Wish For"Edit

Once upon a time, in a faraway land, lived the Parkers - a noble family renowned for their bravery, honour, and loyalty. In a battle to protect the borders of the Kingdom, both Benjamin and Richard Parker fell in battle, but not before Richard asked Norman Osborn to take care of Peter.

Years later Peter has become a skilled fighter, although he was charged mainly with keeping the house clean for Norman and Harry Osborn. Mary Jane is employed by Norman as a maid, and when Norman threatened to fire her if she did not clean his armour properly, Peter steps in and helps her out. Mary Jane tells Peter why the armour must be cleaned - King George is holding a ball to find a suitable knight to marry Princess Gwendolyn. Peter asks Mary Jane to help him sneak into the castle, but she refuses, saying she is in enough trouble already.

At the tomb of Benjamin and Richard Parker, Peter decides he will attend the ball to win Gwendolyn's hand in marriage and intends to build his own suit of armour. Taking inspiration from a spider in the tomb, Peter secretly works on a suit of armour, painting it red with web patterns.

On the night of the ball, Norman Osborn orders Peter to stay behind to clean the house before he gets back. Mary Jane offers to cover for Peter and tells him to enjoy the night.

At the palace, Princess Gwendolyn is unimpressed by the gathered crowd of knights, telling her father true love would not walk through the door. Peter arrives late, with the staff introducing him as "The Prince of Arachne". Peter catches Princess Gwendolyn's eye and when she asks to remove his helmet, Peter replies he would not show any woman his face without first having danced with them.

Peter and Gwen talk about each other and a strong bond forms between them. As Gwen offers to marry Peter, she tells him they have been dancing for hours and that the bell signalled midnight. Peter realises he must return home, and as he runs off, Gwen pulls off one of his webbed brassard while begging him not to go.

Norman and Harry discuss the 'Spider-Prince', and they decide to find him, kill him, and have Harry assume his identity. While cleaning Peter's room, Mary Jane pulls the sheets off his bed and discovers his armour. She tells Peter to explain this to Princess Gwendolyn, but Peter insists they dispose of the armour. Harry interrupts and takes the other brassard at knife point.

Mary Jane tells Peter to take a horse and arrive there to explain himself. When Norman and Harry arrive they find out Peter has been chosen as Prince, and that King George did not intend to deny Gwen's choice of husband. Furious, Norman attacks and is stopped by Peter. Norman cuts the rope holding up the chandelier directly over Peter's head. Gwen pushes him out of the way, but in turn is hit by the chandelier and killed. Peter strikes Norman down, and as Harry is taken away, he swears vengeance on Peter.

After a long period of mourning, Peter is accepted by the people as their Prince and he is knighted. Although the Parker name is once again well known, nothing could fill the hole left by Gwendolyn's death. However the love of Gwendolyn was not the only thing Peter lost that day: Mary Jane is seen lying in bed weeping for Peter's return.

Princess Gwendolyn's death is similar to how George Stacy died in the mainstream Marvel comics: he died pushing someone away from falling debris.

Retrieved from "https://heykidscomics.fandom.com/wiki/Spider-Man:_Fairy_Tales_Vol_1_4?oldid=1453945"
Community content is available under CC-BY-SA unless otherwise noted.