Part of the 'House of M' event 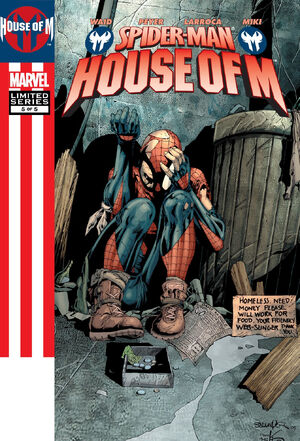 Appearing in "House of M"Edit

Synopsis for "House of M"Edit

Peter's family reads his journal and founds out about their Earth-616 counterparts. They're pretty upset to find out they're all dead, with the exception of Aunt May, who is weak and has frequent heart attacks.

Meanwhile, Peter's still on the run, hiding out in a hovel with a group of homeless Sapes. The House of M NYPD comes in and forces everyone to leave, upsetting most of the humans because they have no other place to live. Peter swoops out of the shadows and stands up to the cops, buying time for the other people to get out. As soon as the cops leave, the humans turn against him, since he brought all that trouble on them anyway by being outed as a human.

Peter barely escapes, and manages to break down and finally call Ben and May. Like the great parents they are, they comfort him, and Ben goes to meet him. Together, they figure out that the only way the mutants will lay off of the humans is if Peter is a hero one last time.

They fake his suicide, send the pictures to the Bugle, and retire as a family to the mountains where Peter begins teaching Richie to fish.

Retrieved from "https://heykidscomics.fandom.com/wiki/Spider-Man:_House_of_M_Vol_1_5?oldid=1724337"
Community content is available under CC-BY-SA unless otherwise noted.