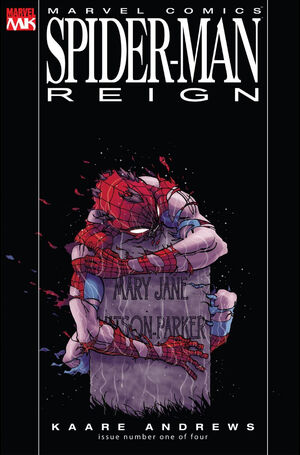 But I'm willing to put that behind us. If. I need you. They're coming. Can I count on you? What do you say, huh?

-- J. Jonah Jameson before get punched by Peter Parker

Reign takes place in a darker future where there are no more super heroes. New York is ran by a mayor who had suspended elections in the name of security and uses his Daily Bugle Television Network to promote his agenda through propaganda. In addition, the mayor uses his reign police squad to patrol the streets and beat down any opposition. As the story opens, he is preparing to activate a new security system, called the Web, that keeps people from entering or leaving the city. Peter Parker is a broken down old man who lives by himself. Mary Jane is no longer alive, yet Parker still has visions of her. The 1st book ends with the return of Parker's old nemesis, Jameson, with hopes of convincing Peter to go back to being Spider-man and fighting reign.

A searing vision of Spider-Man’s future, brought to you by superstar Kaare Andrews (INCREDIBLE HULK). They finally did it. Kicked them to the curb. The “capes and tights” crowd -- there’s no place for them in the Big Apple anymore. Peter Parker? He can’t even remember what it was like to don the red and blue and swing through the night sky. Doesn’t want to, anyway. After all, there’s nothing left to fight for, is there? That is until an old “friend” appears on Peter’s doorstep, bearing a package and a message -- and everything changes. If it’s not Peter’s responsibility, then whose is it?

Retrieved from "https://heykidscomics.fandom.com/wiki/Spider-Man:_Reign_Vol_1_1?oldid=1453998"
Community content is available under CC-BY-SA unless otherwise noted.