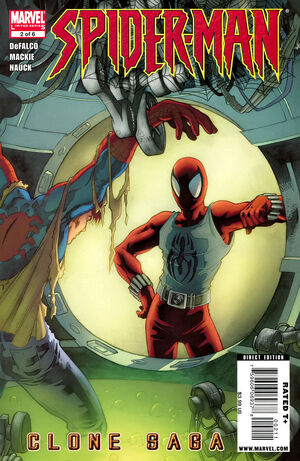 Ben Reilly: carbon copy or the real deal? It’s only issue two and already we’re letting this genie out of the bottle! Find out what the architects of the original Spidey epic REALLY had in store for poor Peter Parker as the sensational series that has everyone talking ramps up into high gear!

Retrieved from "https://heykidscomics.fandom.com/wiki/Spider-Man:_The_Clone_Saga_Vol_1_2?oldid=1454015"
Community content is available under CC-BY-SA unless otherwise noted.