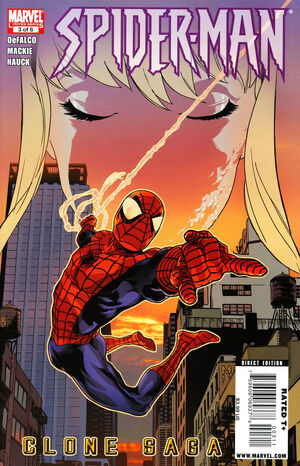 Who is the man called Kaine and what does he want with Peter Parker? Will his deadly endgame mean the end of one Spider-Man...and the birth of another? Plus: baby makes three for Mary Jane and Aunt May's life hangs in the balance! All that...and one haunting ghost from the past returns as Marvel's most controversial book keeps fans guessing!

Retrieved from "https://heykidscomics.fandom.com/wiki/Spider-Man:_The_Clone_Saga_Vol_1_3?oldid=1454016"
Community content is available under CC-BY-SA unless otherwise noted.