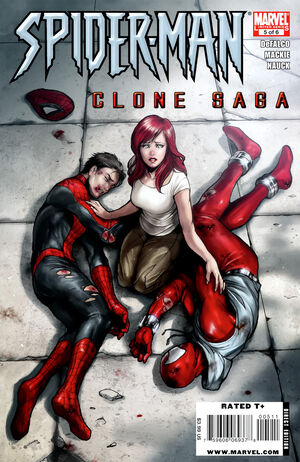 MAXIMUM CLONAGE! It’s Hoo-Ha Time as MJ goes into labor while Peter, Ben Reilly, and Kaine have a clone war for the ages...in the heart of mid-town Manhattan! Only one will walk away as the controversial crossover rockets to its mind-blowing conclusion!

Retrieved from "https://heykidscomics.fandom.com/wiki/Spider-Man:_The_Clone_Saga_Vol_1_5?oldid=1546895"
Community content is available under CC-BY-SA unless otherwise noted.