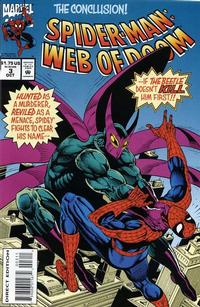 The story title, "Beetlemania!", is a play on the fervor that gripped America when the British band "The Beatles" arrived in the early 1960s, a near-hysteria known as "Beatlemania".

Retrieved from "https://heykidscomics.fandom.com/wiki/Spider-Man:_Web_of_Doom_Vol_1_3?oldid=1454040"
Community content is available under CC-BY-SA unless otherwise noted.